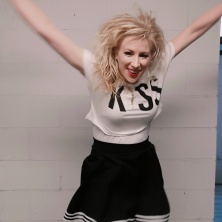 Our goal is to make you and your guests happy with the music we play!

Per suonare abbiamo bisogno di: We need space for 4 People (Voice, Guitar, Bass, Drum) and a Power Supply, the rest we can bring it if needed

Referenze / Esperienza
We have made a tour in New York 2011 as we had won a contest for best European band from the "Real Radio Show" New York. Since then we have been playing and writing new songs There will be a new EP available in Fall 2018
Lista canzoni
Mary Keey Set
Intro
Time
Sun Tonight
Stars
Right Now
Over
Radio
Made in Japan
My Body
Higher
Awake

DJ Cover Set:
Je nach Wunsch - upon request
Biografia
Mary Keey, is an unbelievably Hypnotic, Dance, R&B, and Pop Band That will have you dancing in the Street. If you are a lover of any kind of music, Mary Keey is the show you must see and hear.

The European sensation Mary Keey consist of ; Mary Keey and Phil Gitwilk. Phil is from Italy and Mary is from neighboring Switzerland. The group, which began as a duo, with members Mary (vocals and guitar) and Phil (guitar, background vocals, arranger, and producer). The two met in Switzerland in 2009 while on separate tours. A DJ was brought on board to complete the band. The Band now make their home in Olten, Switzerland and are considered to be well on their way to becoming the next big thing in the Dance & American pop markets.
Foto stampa
Press Book
1 Recensioni