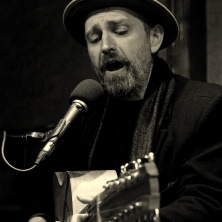 blues, jazz, soul, gospel
............................................
Paul Batto is a "troubadour" with a story to tell - through the medium of a deeply personal poetry steeped in blues. This self-proclaimed "songster" has received critical acclaim for his subtle lyric, earthy guitar playing and strong vocals. Audiences all around Europe have been endeared by his understated unassuming performances and moved by the strenght of his ballads. The two latest releases "AIN'T BUT ONE WAY"(2009) and "LONESOME ROAD" (2014) have received glowing reviews in a number of countries.

Paul was born in 1967 in Ljubljana, Slovenia. In mid 80s he relocated to Switzerland and has since lived in various European countries (currently near Prague, Czech Republic). Over the years Paul has found himself in a wide variety of settings - ranging from solo performances to fronting orchestras. The early, and perhaps most defining years were spent honing his vocal skills with a low key vocal gospel group A.B.C - short for "A Better Country". Blues bands under his name followed as did a number of cooperations with various jazz combos and big bands in Switzerland, Hungary and Czech Republic (SFV Big Band, H, Czech Radio Big Band, CZ etc.). Since 2003 Paul has toured extensively as a solo artist and in a duo with a Czech pianist Ondra Kriz - appearing at numerous festivals, theatres, culture houses and clubs in The Netherlands, Belgium, Luxemburg, France, Switzerland, Austria, Germany, Czech Republic, Slovakia, Hungary, Poland, Lithuania and Estonia.

Per suonare abbiamo bisogno di: electric socket, some chairs and a cup uf tea...have my own sound system