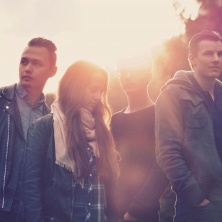 glaston is a Post-Rock Band from Basel/Zurich, that fully relies on their instruments, void of any vocal input. Piano, guitar, bass and drums carry their music on a self-forgotten journey, sailing diverse oceans of sounds. Captivating moments accompanied by touching melodies meet polyrhythmic and sometimes complex structures. Sounds of glass reflected by howling winds and stormy waters that blur the perception of remembrance and imagination.

Lista canzoni
- We Travel, Some Of Us Forever
- Setting Out
- Sailing Stormy Waters
- Sailing Calm Waters
Biografia
glaston is a Post-Rock band from Basel/Zurich which has been founded early 2013. Containing of 4 members (Selina Maisch, Jake Gutzwiller, Timo Beeler and David Preissel, who was the drummer for Pure Inc. and 69 Chambers), glaston is purely an instrumental band with emphasis on originality and high artistic quality.

The band pursues the idea to take their listeners on a diverse and adventurous musical journey - void of any vocals. This opens up a wide variety of possibilities and poses a fascinating challenge for the band members to unfold themselves creatively.

Various bands such as Sigur Rós, Yann Tiersen, God Is An Astronaut and A Perfect Circle can be heard as a source of inspiration for glaston‘s music.