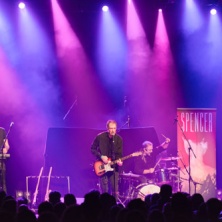 – Spencer have just been supporting New Model Army (KiF/Aarau). In may they have been winning over a 1500-audience in Leipzig.

– Great liveband with a passionate and thrilling live-performance

– Spencer's show is suitable for all sizes of stages

Until she Walks On By
S.O.A (The Sound of the Ambulance)
Stronger
Shadows Through The Curtains
Art Through Sound
After All
The Idea of Something New
One In a Million
'73
Going North
Way Back Home
Bonus Track: Mine Is Here
Going North
The Horizon
S.O.A The Sound of the Ambulance
Miles Away
This World
Shame
H.E.R
Metropolis
Anything
The Week
The Eyes
Spit (never stand still)
Mini Cooper
Islands
Bad Market
Don't Go
Timewarp
Don't wanna spend (my time with you)
Monitor
Primetime
Calm Down
Dark Star
Follow the Sun
Alien Nation
Long time in a Safe
Slowing Down
Biografia
Biography Spencer

Nick Cave, Editors, The National, New Model Army: These names are mentioned, if fans and press talk about Spencer. After great reviews in «Orkus», «Legacy» or «Slam magazine» (8/10 points) as we ll as «Rolling Stone», they're back: Spencer, «best live-award 2013»-winning band are back with their strong 4th album.

Now Spencer are back with their strong and intense 4th album «We Built This Mounatin Just To See The Sunrise» which reached top 40 in Switzerland right away. Since then the band gets great reviews for the new album from different parts in the world. Even important US-indieradio KCRW has included them in their playlists.

Spencer are a a hard working band: With more than 400 shows in venues and festival across Switzerland and abroad and a lot of great reviews, they recieved the «Live award» by Galvik Zug, have been rewarded «Top 10 Swiss albums» of radio Virus of 2013 in the same time.
Foto stampa
Press Book